One button does it all. 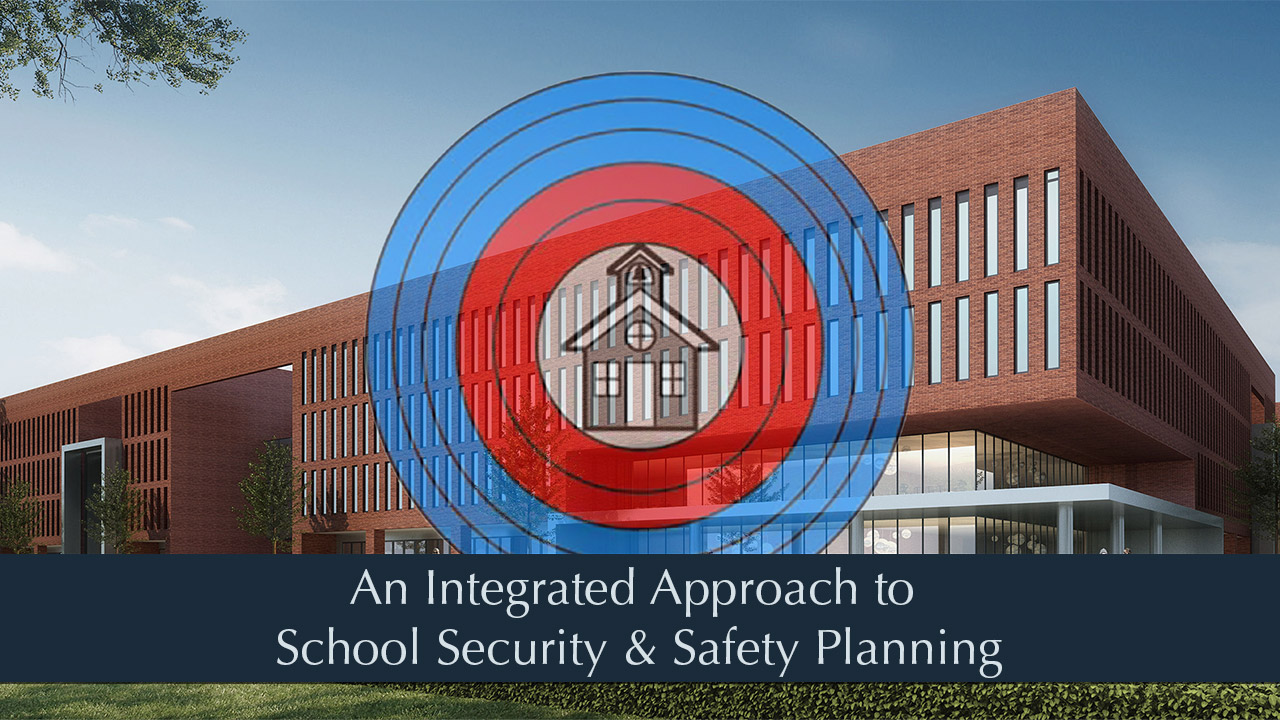 Effective school security plans begin with a strategy. To most, this sounds like an obvious point. However, some of the most common problems I encounter as a consultant are the absence of cohesive strategy in the design of school security plans and over reliance on a limited set of protective measures.

Fundamentally, preparation for active shooter violence is a process of risk management and conceptually no different from any other security and safety planning activity. The ultimate aim of any risk management program is to effectively characterize the risk to an organization’s assets and implement measures to reduce risk in alignment with the organization’s risk appetite while tending matters of operational needs, culture, branding, and budget.

An effective school security plan employs a combined approach to reducing risk probability and risk criticality. In the context of security risk, probability is the result of Threat (an adversary with intent and capability to cause harm) and Vulnerability (the state of conditions that would allow the adversary to succeed in causing the risk event). Proactive security measures aim to reduce Risk Probability by either reducing Threat or reducing Vulnerability. If proactive measures are implemented effectively, they may be successful in reducing Risk Probability, but there is always an element of uncertainty. To further reduce risk, reactive/mitigative measures are employed to reduce the harmful effect of risk events (Risk Criticality).

In protective theory, this concept of multiple layers of proactive and mitigative measures is often described as concentric rings of protection. This concept is illustrated in the following diagram. The outermost rings of the diagram (colored in blue) represent proactive measures aimed at reducing probability by reducing Threat and/or Vulnerability. However, despite our best effort to mitigate the probability of active shooter attacks, no strategy to prevent events can guarantee success with certainty. To address this reality, additional preparations should be implemented to reduce the severity of attack events. Additional mitigative and reactive countermeasures are represented by the innermost red layers in the diagram below.

In the context of school security planning, proactive risk management starts with reducing potential threat. This is first accomplished by reducing the potential conditions that contribute to advancement on the targeted violence pathway. Reinforcement of positive school culture, creating strong bonds between staff and students, mentoring students with problems, actively intervening in bullying situations, and restorative practices are all examples of measures aimed at reducing threat. Additionally, as promoted by the US Government’s Safe School initiative in 2000-2002, having a formal system in place to identify potential threats and warning behaviors, investigate and assess threats, and manage potential threatening situations before they result in violence is another critical element of reducing threat.

Positive school culture and threat assessment may be effective in reducing the threat of students escalating toward violence, but these measures have little effect on outsider adversaries who may target the school for reasons beyond the school’s influence. The only way to effectively mitigate probability in this risk situation is to establish an effective physical protection system. Effective physical security requires that a threat is detected early and delayed from accomplishing the objective long enough for a response force to intercept. If these three elements (Detection, Delay, and Response) are deficient or out of synch, the system will fail. In virtually every school attack perpetrated by an outsider (e.g., MSDHS, Sandy Hook, West Nickel Mines, Platte River Canyon, etc.), there was a major failure in one or more of these three key functional elements. As of present, very few schools in the United States have a physical security program that truly meets the criteria for performance effectiveness.

If an attack does occur, an effective school security plan integrates additional measures to mitigate the impact of the risk event. In school security, this starts by having a response force capable of effectively intercepting a threat before they can cause mass violence. If the effective response time of local police is longer than three minutes, it is usually impractical, if not impossible, to achieve enough delay time to prevent mass tragedy. Unfortunately, average police response times (effective response times) during active shooter events often range between 7 and 10 minutes (depending on cited source). The only way to guarantee an effective and reliable response is to have a reliable alert and communications system and an on-site response capability provided by School Resource Officers or well-trained armed security officers.

In addition to communications and tactical response, plans and preparations should be emplaced to manage the situation safely, effectively, and restore normal operations as quickly as possible. This starts with an effective and well-organized school emergency response plan. Despite the importance of having a solid and integrated emergency plan, this is one area where many schools have problems. School emergency plans are often a collection of memos with little integration or effective consideration to issues such as redundancy, feasibility under high stress conditions, and the many faces of “Murphy’s law” that emerge during crisis management.

Once the foundation is laid through effective response planning, teachers and faculty need to be trained in their functions and regularly drilled in response procedures. One of our clients, Shorecrest Preparatory School, conducts lockdown drills bi-monthly to ensure that teachers and staff members are instinctive in their response. When questioned about the frequency of lockdown drills versus legally-mandated fire drills, Mike Murphy (Headmaster at Shorecrest Prep) tells people that no kids have been killed in school fires in over 50 years but one only needs to watch this week’s news to be reminded of the last time school children were killed in an act of violence.

The Guardian SafeSchool Program® as a Model for Best Practices

The CIS Guardian SafeSchool Program® integrates all of these approaches to managing safety and security in schools while reinforcing school climate and culture. Our philosophy behind the design of the program is a holistic and multi-layered strategy that reduces risk by preventing acts of violence and mitigating the potential impact of events through effective preparation and response.

CIS is honored that John Jay College of Criminal Justice has peer reviewed the program and endorsed it as a model for best practices. It is our hope that states, school districts, and private schools will consider the methodology described in his article as they search for an effective and balanced solution to reducing risks of targeted violence while simultaneously fostering environments conducive to good education.

For more information about school security planning, protective strategy, and measures for reducing negative impact on school climate and culture, see the YouTube video below.

Craig is the lead designer of the GuardianCall panic alarm and emergency alert system. As a security consultant specialized in managing risks of mass homicide, he has assisted schools, colleges, and district organizations throughout the nation in improving their security and emergency readiness programs. In addition to schools, his clients include a diverse range of corporations and government organizations such as the U.S. Department of Justice, U.S. Capital Police, European Central Bank, European Commission, European External Action Service, and more.

This is a test Popup